The Omaha chapter of the Democratic Socialists of America is holding its first meetup, open to the public!

Come out and learn more about Democratic Socialism and what the DSA can do for your community!

Food will be provided. 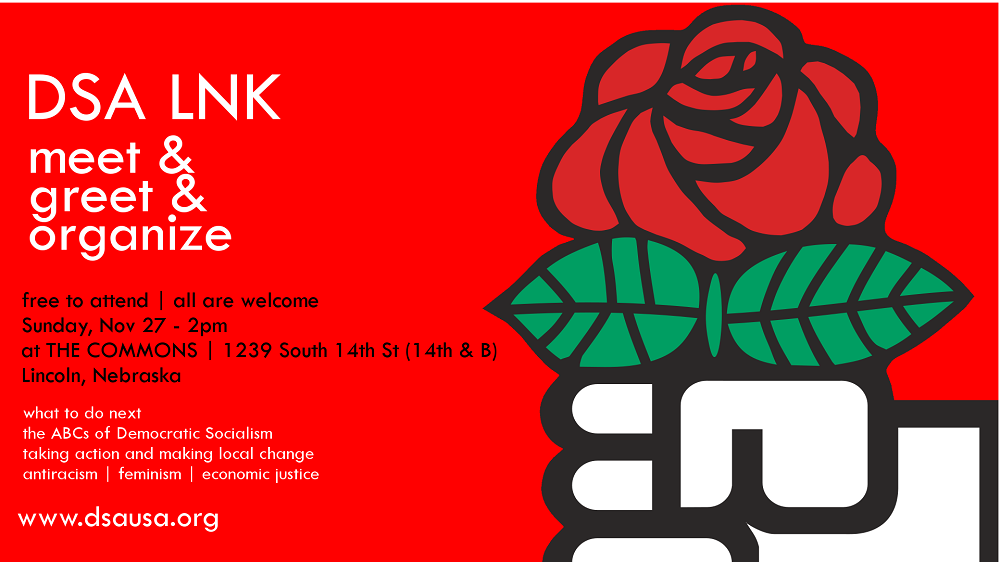 Thrilled to announce the first meeting of DSA Lincoln!

The meeting began at 2pm. Meeting organizers introduced themselves as volunteer organizers with DSA.

A brief history of DSA was provided, including its structure nationally and locally. Then the basic tenets of Democratic Socialism followed. Both lessons are available on the website dsanebraska.org/about

All meeting attendees were given the chance to introduce themselves and talk about why they were at the meeting and what made them want to become politically active, and what was important to them.

Notes from this discussion include:

A summary of the issues discussed at the 2016 Nebraska Democratic Convention platform writing process followed, including:

The group then discussed potential objectives for local actions, including:

Creating an Issues Framing committee was proposed. This committee would help create narratives and talking points to help members talk about issues and help educate the public. Specifically on policies and concepts that may be familiar by name but not by concept to people, such as Democratic Socialism and Tax Increment Financing.

The process of forming a local DSA Chapter in Lincoln was discussed. A local chapter needs 15 dues-paying member, and their organization is up to the local chapter. There was a consensus to postpone setting group structure and leadership until later meetings, assuming more people would attend future meetings and should have a say in the make-up of a Lincoln chapter.

An upcoming public meeting on December 2 was discussed. The public meeting was a discussion of the candidates for Lancaster County Director of Corrections.

The next meeting was set for December 18 at the same location, the Commons at 14th & B. Meeting attendees were encouraged to invite other people to the next meeting.